Binge watching doesn’t have to be ugly 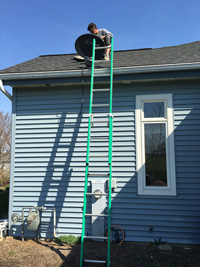 Dave had hip replacement surgery just 5 months prior but I was vetoed on the “let our kids do remove the former dish” suggestion.

Living out in the country means we are reliant on satellite or internet streaming to watch TV or movies. After 10 years with the same satellite provider we decided to give the competitor a try.

I should explain with a bit more detail. We bought an Amazon Fire to stream Amazon movies. To further minimize expenses we reduced our satellite subscription to the smallest package possible and bought a refurbished but very powerful antennae (I think we can get channels in Chicago!). Then one of our sons introduced us to Hulu, Netflix and TV series binging.

It’s been a lot of trying new things, trying to reduce costs, and get the best of TV and movies. Mostly it’s been a success even if we are addicted to House of Cards and The Americans.

Now back to my gardening issue. When you switch from one satellite provider to another, the new company puts in their equipment but they do not remove the old equipment. The original provider also does not remove their dish. The homeowner is responsible.

In addition the new company is really picky about where they wanted to put the satellite dish. It was during a nasty ice storm in January that our installer arrived. He wasn’t happy about being outdoors trying to set the post as I suggested several the less obtrusive locations. In the end there is a huge in-your-face advertisement (their logo in 6+ inch letters) in my vegetable garden right where I plant my herbs. Bottom line? Ugly, in the way, and yet necessary for our couch potato moments.

Never one to suffer without reaction, I researched my options for hiding the dish. It can’t be inside anything or have a fence obscuring it; however, it can camouflaged or improved with spray paint as long as you pick a non-metallic paint. So minimizing its flashy exterior and removing the advertisement were an option.

The end result was a subtle medium gray with a navy blue bumblebee stenciled on the face. When the oregano gets into action I’m hoping the result will be a more tactful presentation.