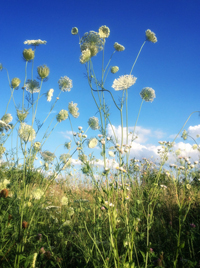 While Queen Anne was tatting white lace, she pricked her finger and one drop of blood stained the lace. The lace became a flower and the drop of blood the central dark red or purple floret present on some, but not all, Queen Anne’s Lace flowers.

Regardless, Queen Anne’s Lace, also called “Wild Carrot,” is a common plant in dry fields, roadside ditches, and open areas. It was introduced from Europe, and the carrots that we eat today were once cultivated from this plant.

It grows up to four feet tall with white lacy flowers and leaves that are two to eight inches long and fern-like. This plant blooms from May to October. It is a biennial, living for two years. However, it seeds easily and prolifically. 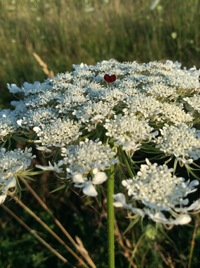 Some wild animals eat this wildflower. In addition caterpillars of the Eastern Black Swallowtail butterfly eat the leaves, bees and other insects drink the nectar, and predatory insects, such as the Green Lacewing, come to Queen Anne’s Lace to attack prey, such as aphids.

People can eat the large taproot, which of course, is a carrot. Although the root is edible when young (but not tasty like its cultivated relatives), the leaves can cause skin irritation in some people, especially those sensitive to celery or chrysanthemums.

Queen Anne’s Lace is an invasive weed and it is listed as a noxious weed in at least 35 states. It is invasive in Wisconsin. Invasive species can alter ecological relationships among native species and can affect ecosystem function, economic value of ecosystems, and human health. You can learn more about the impacts of invasive species on the Wisconsin DNR’s why should we care page.