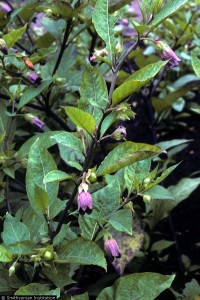 Here in Wisconsin, we’ve always had Belladonna in our gardens, fields and roadsides but this year the deadly weed seems particularly invasive and worth giving you a heads up.

Atropa belladonna, commonly known as Belladonna or Deadly Nightshade, is one of the most toxic plants found in the Western Hemisphere. All parts of the plant are poisonous. The berries pose the greatest danger because they look attractive and have a somewhat sweet taste. The consumption of two to five berries by children can be lethal and ingestion of a single leaf of the plant can be fatal to an adult. The root of the plant is generally the most toxic part. It is not poisonous to touch.

The name itself sounds spooky, like something witches might use to cast magic spells, and there’s good reason for that. Nightshade is the common name used to describe more than 2,800 species of plants with very different characteristics. Some are good, even delicious. Some are bad, and some are deadly. The “good” group includes white potatoes, tomatoes, green peppers, red peppers, eggplant, pimentos, paprika and cayenne.

Even the “bad” or deadly nightshade has its attributes. It’s ironic a family of plants that are deadly, can cure all sorts of ills, but that’s part of the mystique behind nightshade. It is used to make atropine, which helps treat eye disorders, cardiac arrest and certain breathing problems. Today, doctors rarely perform eye surgery without it.

How to spot it?

Deadly nightshade is vine-like and grows up to six feet high. Its thick root penetrates deeply into the ground, making it difficult (not impossible) to pull. Vaguely shiny leaves are oval-shaped with pointed tips and grow alternately on each side of the vine. It flowers between May and October.

Deadly nightshade blossoms are deep purple to deep blue with orange or yellow stamens. Each flower ends in five blunt-pointed petals. After flowering, it produces green berries that ripen to dark red or nearly black between September and October.

Deadly Nightshade has many different names all over the world. The scientific name Atropa Belladonna comes from the various uses of the plant as atropa is a derivative of the Greek word atropos, which is one of the three Greek fates, and means “to cut the thread of life”. Belladonna comes from the Italian word to mean ‘beautiful lady’ as Italian ladies used to use the sap of the deadly nightshade to dilate their pupils as they thought this made them more beautiful.

It is also known my other nicknames other the world, which include dwale, devil’s herb, love apple, sorcerer’s cherry, witches berry, divale and dwayberry.

How to get rid of it?

Pull it out! Dig out the roots. And if necessary use Round-Up to eradicate. It is not harmful to touch, but it is important to remove before it is innocently ingested by a child or pet.