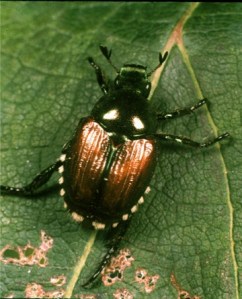 They are here. They are probably the most devastating pest of urban landscape plants in the eastern United States. Japanese beetles.

The Japanese beetle was first found in the United States in 1916 in New Jersey. It is thought that the beetle larvae entered the U.S. in a shipment of iris bulbs prior to 1912, when inspections of commodities entering the country began. Where there are natural predators in Japan, there are few to none in the U.S. I believe the only bird that will eat them are chickens. I don’t own any chickens.

As  grubs they chew off grass roots resulting in large dead patches. As adult beetles they will eat almost anything growing – trees, shrubs, flowers, and even crops. Last summer one Madison golf course lost every single tree on the course to beetle damage.

They live long enough to eat, breed, and lay eggs. They prefer to lay the eggs in flat, open grassy areas near food sources (like my flower beds).

Japanese beetle traps with attracting pheromones are effective at trapping lots of beetles, but unfortunately more beetles end up in yards where there are traps than those without traps, resulting in increased feeding damage. Beetles will travel as far as 5 miles to reach these traps. So one plan of attack is to find a neighborhood about 5 miles from your home and give out free beetle bags.

Milky Spore a naturally occurring microscopic bacteria will kill Japanese beetle grubs before they can grow into ravenous adults and works even better if used in combination with beneficial nematodes. However, if your neighbors’ don’t also kill the grubs you will still have beetles flying in. Milky spore is expensive and you need to repeat sousing your lawn and gardens for at least 3 years to see decent results.

In my battle against these nasty invaders I use a three-part system 1) an early spring systemic 2) a spray poison and 3) soapy water.

Bayer 2 in One Systemic makes your plants less tasty to bugs and it has a great fertilizer in it. You sprinkle the crystals around the base of plants early in the spring before they green out. You have to repeat every 8 weeks so that all new growth remains protected. I use it on my purple sand leaf cherries, roses, and other Japanese beetle favorites.

Sevin is suitable for virtually any outdoor insect problem. I use Sevin spray on any plant with beetles on it. It kills them and keeps them off until the next rain. It doesn’t penetrate plant tissue and it is easily broken down by the environment. However it kills all bugs, even good bugs like bees so be sure to use it sparingly.

The jury is out on smooshing. Some people say the pheromone given off during killing will keep beetles away. Others say that by squishing them dead you are releasing the scent that attracts them to each other and you’ll get even more beetles. In that I don’t like touching the nasty little things, I opt for soapy water.

A little dish detergent in your water keeps the beetles from swimming and surviving the bucket. Early in the morning when it is cooler the beetles are sluggish and slower moving. Hold your soapy water under invested branches and shake them in. It’s time consuming but it works.

No solution is perfect and I’m sure the battle will continue again for many years.

An interesting read on this subject